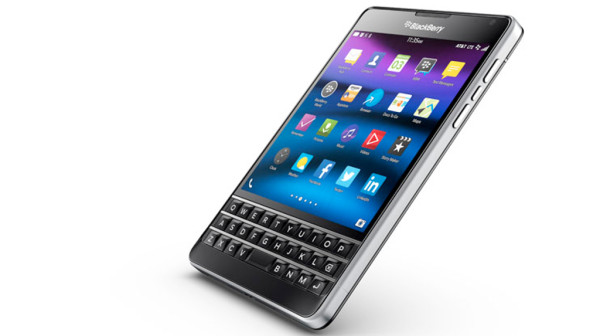 “The BlackBerry Passport is ideal for the power professional who wants an innovative wireless device focused on productivity,” said Jeff Bradley, SVP, Device Marketing and Developer Services, AT&T. “Available first on the AT&T network in the U.S., customers will benefit from the newly redesigned Passport’s enhanced features, including a wider screen, 32 GB of storage, and a 3450 mAh battery.”

“We value our continued partnership with AT&T and we look forward to launching the new and uniquely designed BlackBerry Passport device for AT&T customers in the U.S.,” Ron Louks, President, Devices and Emerging Solutions at BlackBerry. “Built with security at its core, the BlackBerry Passport stands apart from the rectangular-screen, all-touch devices in the market today, offering users more than a full day of battery life and new innovations, including the industry’s first touch-enabled QWERTY keyboard.”

AT&T is committed to delivering fast and friendly service to its customers. AT&T was recognized as the highest ranked wireless provider for overall purchasing experience by J.D. Power,8 for the third time in a row.  AT&T outperformed competitors in the J.D. Power 2014 Volume 2 study and received the “Highest Satisfaction with the Purchase Experience among Full-Service Wireless Providers, Three Times in a Row.”

For more information about the BlackBerry Passport, visit att.com/blackberrypassport orwww.blackberry.com/passport.

1AT&T products and services are provided or offered by subsidiaries and affiliates of AT&T Inc. under the AT&T brand and not by AT&T Inc.

8AT&T received the highest numerical score among full service wireless providers in the proprietary J.D. Power 2013 (Vol. 2) and 2014 (Vol. 1 & 2) Full Service Wireless Purchase Experience StudySM. 2014 Vol. 2 based on responses from 10,079 consumers measuring 4 full service wireless providers and measures opinions of consumers who purchased a wireless product or service within last 6 months.  Proprietary study results are based on experiences and perceptions of consumers surveyed January-June 2014.  Your experiences may vary. Visit jdpower.com.

AT&T Inc. (NYSE:T) is a premier communications holding company and one of the most honored companies in the world. Its subsidiaries and affiliates – AT&T operating companies – are the providers of AT&T services in the United States and internationally. With a powerful array of network resources that includes the network with the nation’s strongest LTE signal as well as the nation’s most reliable LTE network, AT&T is a leading provider of wireless, Wi-Fi, high speed Internet, voice and cloud-based services. A leader in mobile Internet, AT&T also offers the best global wireless coverage, based on offering voice and data roaming in more countries than any other U.S. based carrier, and offering the most wireless smartphones and tablets that work in the most countries. It also offers advanced TV service with the AT&T U-verse® brand. The company’s suite of IP-based business communications services is one of the most advanced in the world.

Additional information about AT&T Inc. and the products and services provided by AT&T subsidiaries and affiliates is available at www.att.com/aboutus or follow our news on Twitter at @ATT, on Facebook atwww.facebook.com/att and YouTube at www.youtube.com/att.

A global leader in mobile communications, BlackBerry® revolutionized the mobile industry when it was introduced in 1999. Today, BlackBerry aims to inspire the success of our millions of customers around the world by continuously pushing the boundaries of mobile experiences. Founded in 1984 and based in Waterloo, Ontario, BlackBerry operates offices in North America, Europe, Middle East and Africa, Asia Pacific and Latin America. The Company trades under the ticker symbols „BB“ on the Toronto Stock Exchange and „BBRY“ on the NASDAQ. For more information, visit www.BlackBerry.com.

The BlackBerry family of related marks, images and symbols are the exclusive properties and trademarks of BlackBerry Limited.  BlackBerry, BBM, QNX and related trademarks are registered with the U.S. Patent and Trademark Office and may be pending or registered in other countries.  All other brands, product names, company names, trademarks and service marks are the properties of their respective owners.